Foundling, 5 years old, found roaming the streets of Manila. This is what is written in the DSWD (Department of Social Welfare and Development) report of Romnick Toledo.

Romnick’s earliest memory is of living with two siblings, an até (older sister) and a younger sister. His father was always at the sabungan (cockpit) and his mother stayed home. He remembers eating rice and salt for their meals. Nearby were some mountains where he would play with his até but they didn’t have many neighbors or playmates. His first recollection of drawing was using gas as a medium or the few pencils and paper he had on hand.

One day, Romnick’s até got very sick so the family travelled some distance until they arrived in a small hospital by the water’s edge. While his sister was being treated, he wandered around the area and lost track of time. When he returned close to nightfall, he could not find his family. He searched in all the rooms of the little hospital but could not find any sign of them.  He sat outside on the sidewalk not knowing what to do. A kind lady came by and brought him to a DSWD office.

After staying in an institution for foundlings for several months, he was brought to Manila Boystown Complex, an orphanage for homeless children, where he lived amongst other abandoned and forgotten boys.  When asked what living in an orphanage was like, Romnick fell silent and started to tear. He said it was very hard, but there were also some happy times. Some teachers became his mother figures.

In grade 6, he remembers joining art contests and helping paint murals. This ignited his interest in art. In his 3rd year of high school, Romnick was chosen by Kaisahang Buhay Foundation to be a scholar of its Independent Living & Educational Assistance Program (ILEA). After graduating from high school, he applied to the University of the Philippines, College of Fine Arts, where he graduated on June 25, 2016 with a Bachelor’s degree in Fine Arts, major in Visual Communications.

Since he got separated from his family at the tender age of 5 years old, Romnick has never lived in a real home with a family. Other orphans and abandoned children have been his only family.  His experience being an ILEA scholar has taught him to live independently, budgeting his allowance carefully, and working hard to make sure to accomplish his school requirements. He had to forego many meals in order to buy art materials. But all that is behind him. 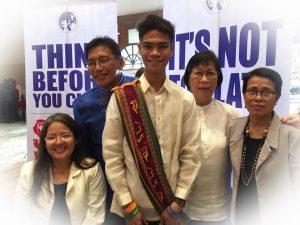 Romnick is now 22 years old. He is not even sure if that is his real age or if Romnick Toledo is his real name. When asked what motivated him to strive throughout the difficulties in his life, he answers, GRATITUDE. He also believes in thinking positively, not worrying about the future but being present in the now and being the best he can be. When asked if he ever thinks of looking for his family, he says maybe someday, when he is self supporting and successful.  Romnick is definitely on his way there.