It’s All About Love

The moment that opened my heart to adoption happened three years before we actually did it. Without planning it, I ended up front row in a drama of an emotional reunion in one of the slums of Manila after 16 years between two women, a biological mother and an adoptive mother (sans the son who was already 16 years old and was in Canada at that time).

I knew the adoptive mother, but I was not even supposed to be there… The guy giving me a ride home asked me to tag along with him while he will just drop by a “meeting” that he arranged. Little did I know that this “meeting” would forever change my life.
The moment that is forever etched in my mind is that of a teenager holding and staring at a photo of someone who looked exactly like him, but with more weight, looked cleaner, and was wearing a football jersey. The teenager was holding the photo of his Fil-Canadian brother who was adopted 16 years ago. He was staring at it as if frozen in time. “This looks like me. It could have been me. Why him? Why not me? Why is his life so different?” These were probably some thoughts going through his mind. In the background, I could hear the two crying women thanking each other.
That scene opened my heart to adoption because it showed me how my Canadian friends’ decision to love and open their hearts to adoption 16 years before, led to a brighter future for that one child, while also enriching their own lives in the process. It gave them an unparalleled opportunity to share their love and blessings with someone whom God has prepared for them.
For many childless couples, the decision to adopt comes with many side issues and fears that could be overwhelming, but could only be settled with one resolve: TO LOVE. Making the decision to love unconditionally frees us up from fears and opens the floodgates to indescribable happiness and yes, maybe some pain. Although for us, the pain has been minimal so far (only once when an ignorant relative maliciously added “adopted” in describing my son in an uncalled for context. I have heard enough stories to know that it could be painful once your child searches for his biological parents and begins asking questions you cannot answer.
My son is now 8 years old and although he knows that he is adopted, I don’t think he fully understands yet what it means. If and when that time comes, I hope and pray that our love for each other will see us through. My husband and I praise and thank God every day for giving us the opportunity to love and become parents. We cannot imagine our lives without our son. Truly, loving is what life is about.
“We are very happy to have opened our hearts to adoption!” 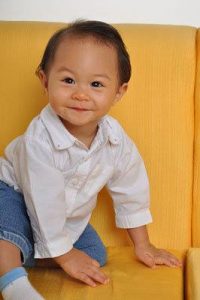