Published in book form by the Adoptive Families Foundation

We had been warned, of course. Adoption would not be the simple, rosy alternative to bearing one’s own children. It would have its challenges, as well as blessings.

Adopted children, we were told by well-meaning acquaintances, could turn out to be problem children, misfits with emotional disabilities. “But so can biological children,” my husband and I pointed out.

You can never tell what adopted children can turn out to be, said others. It’s in the genes, you know, not just the environment. “Well, that argument can work both ways,” my husband and I insisted. “Biological children may have your genes, but there is still environment to reckon with.”

But what about the expense? Lawyers’ fees can cost even more than a Caesarian, we were told. “So we’ll consider it money well spent to bring another member into the family,” we joked.

You already have one daughter of your own. Why not be happy with that? we were asked. Why tamper with God’s plan? “Well, if God put a series of events into our lives which seems to point toward adopting a second child, isn’t that part of His plan, too?” we insisted, thinking that had to be the ultimate argument.

It wasn’t that we told everyone we knew about our plans to adopt. It’s just that perhaps those words of caution stood out so clearly in our minds at the time because, whether we admitted it or not, they echoed those little nagging “second thoughts” that probably all soon-to-be adoptive parents have. Perhaps we were unconsciously arguing with ourselves – and winning.

Because, having considered those warnings, both external and internal, our minds were just as made up as when my husband first mentioned, “I know you may not be thinking about it yet. But if you think you might want to try adopting, just let me know.”

For me, that was step one in God’s plan. Not only was this a totally unexpected offer from my husband, but I had secretly entertained thoughts of adoption in the days just before. I had brushed them aside as wishful thinking, though, since I was quite sure my husband wouldn’t go for the idea.

This was about five months after losing our second baby, also a girl. She had been born with a congenital heart defect and, although she was a big, healthy-looking baby, she survived only five days. It had taken me several weeks after that even to begin putting all the baby things away, as though the act of packing the little shirts and diapers in boxes would force me to acknowledge that she was gone. What made the loss even more painful – if that is indeed possible – was that my doctor had warned me against another risky pregnancy (both my deliveries had been close calls). And so my husband and I had agreed ahead of time to a ligation, never dreaming of course that we would lose our second baby. And so it appeared that our eldest daughter would be an only child.

But once God had taken that first step through my husband’s question about adopting, the rest seemed to follow in quick succession. In the weeks that followed, during which we were “getting ourselves ready” to think seriously about adoption, we kept running into people or situations that put the whole idea of adoption in a positive light.

Someone came to buy Christmas décor from me, and she turned out to have a lovely adopted daughter. We were invited to an Advent dinner, and the host family had a set of precocious twins, also adopted. We spent a weekend in Tarlac, and a woman who was watching her children swim with my daughter pointed out her adopted son, splashing happily in the water. I was assigned to write an article on social services, and I happened to be told about the nun in charge of the home for unwed mothers at the Good Shepherd compound in Quezon City.

I remarked laughingly to my husband that I had never met so many adopted children, or adoptive parents, or people involved with adoption in such a short span of time. Secretly, though, something was beginning to tell us that this was all part of The Plan!

Taking heart from all this, my husband and I decided we were ready. Not having the faintest idea where to begin, I called the Good Shepherd nun whose name had been mentioned to me, and she referred me to the Kaisahang Buhay Foundation.

Although we asked “Kaisahang what?” at the time, we later learned that this foundation is the only private child-placement agency authorized by the Department of Social Welfare and Development. And we were pleasantly surprised and thoroughly impressed with the professionalism, concern and warmth of all the KBF staff. From our first telephone inquiry all the way until the judge’s final decree, the social workers assigned to us helped make the entire process both bearable and understandable.

But even months before the court’s granting of our petition for adoption, our new baby had come to live with us. This was meant to fulfill the required custody period. But as far as we were concerned, she was ours for good. We even started calling her by the name we had chosen, Angelica. The court papers would only make it official.

To be honest, though, the feeling that “She’s ours” wasn’t immediate. In fact, when my husband and I first visited the little baby at the foster home where she had been placed soon after birth, I didn’t feel anything definite. I don’t know what I was expecting to feel, but I thought I should feel something. A rush of maternal love, maybe, or nervousness, or awe that here was this new person going to share our lives from now on.

But, no. I found her appealing, as all babies are, but I also found myself thinking she looked thin for a two-month-old and that her ears were too big. I did notice, though, that she stared at us very solemnly with her wide, attentive eyes before she fell back into the nap we had interrupted.

We took her home a week later. All the way home in the car, I couldn’t help feeling the same impression of being “sized up” by this little bundle. She didn’t fret at the unfamiliar arms holding her, as I was afraid she would. She just lay there, her wise-looking eyes taking everything in.

Even when, as soon as we got home, we had her pose with our older daughter for their first picture together, Angelica sat propped up in her new ate’s embrace, totally unruffled. She clearly wasn’t going to fuss about joining this family, so why should we? From that day on, we knew she belonged right here with us.

As I said, we were forewarned about the risks of adoption. But we were totally disarmed by the joy and blessing Angelica turned out to be! 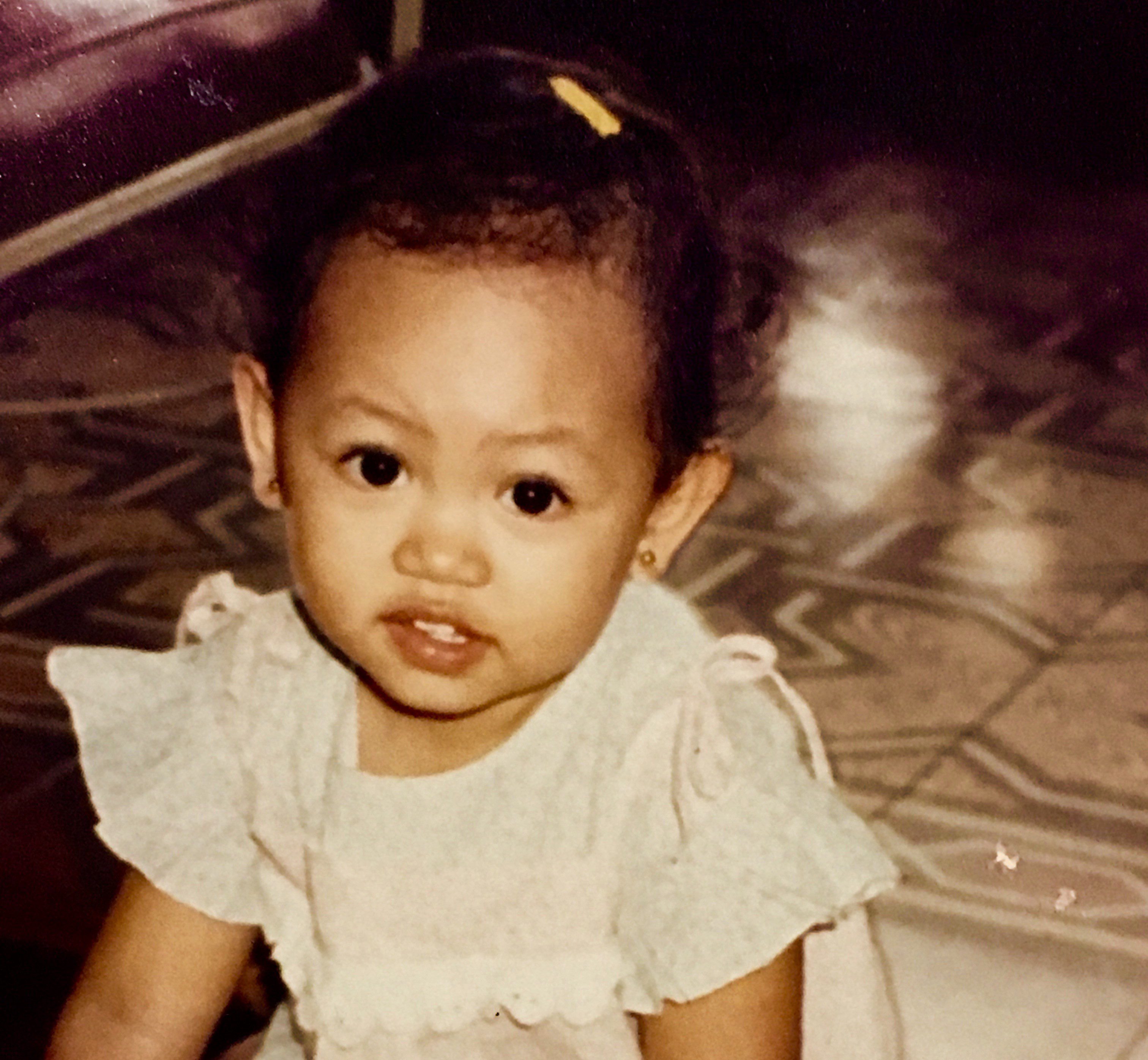