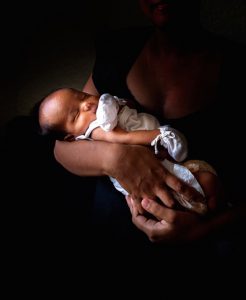 There was a time, several years ago, when our pregnant girls gave birth at the Nazareth Home (NH). For as long as a girl’s pregnancy was healthy, her baby was developing well in her womb and she was well prepared, having taken childbirth classes, and had regular hospital check ups, she was a good candidate to give birth in the safety and caring environment of the Home. A childbirth educator taught weekly classes, an able midwife of many years came weekly to give pre-natal check ups, and trained staff were on hand to assist in the event of a birth. As a precaution, we also had a pediatrician on standby.

A pregnant girl who we nicknamed ‘Bunso’ – because she was the youngest in the Home at the time, took a particular interest in the birthing process and would be hovering nearby as a mother would give birth, using the upright and active method, an approach to giving birth naturally. This was the technique taught, which encouraged activity rather than passivity, for movement rather than immobilization, and for a woman’s right to choose whatever position she finds comfortable throughout labor and delivery. This was an empowering experience of birthing valued by all the girls who chose natural birth.

Bunso, who was 17 yrs. old at the time, came to NH early in the first trimester of her pregnancy. She had many months to grow and learn all about pregnancy and childbirth. But what was special about her is that she was mentally challenged and her mental age was several years younger than that of her birth age. The older girls and staff had to be extra patient and gentle with her because of her condition. She was like a clingy child and could not be relied on to do her chores, which are part of the responsibilities our pregnant girls have in the Home. Over time, she learned and became more cooperative, endearing herself to all the other pregnant girls.

For the next few births of other mothers, Bunso would observe from the doorway of the birthing room then would slowly go closer to watch the birth. The midwife and assistants would start asking her to do little chores during labor and soon, the girls would get used to having her around. She was always eager to be of any help. Bunso got closer to her own due date and insisted that she would also give birth in our birthing room. At first our midwife had her doubts because of the mental state and age of Bunso. But after some deliberation with other midwives, they decided that when the time came, and there were no complications or signs of distress, they would give it a chance. Bunso had a relatively safe pregnancy in the 7 months she was at the Home and her regular check ups showed she and her baby were healthy.

When it was Bunso‘s due date and she started to go into early labor, she was very calm and followed the tips she learned. She progressed into the labor without much fuss and braved the contractions using breathing methods and movements to ease the discomfort. When it was the 2nd stage of labor, she calmly sat on the birthing stool, surrounded by capable, caring and familiar people. In the silence and comfort of the birthing room, Bunso gave birth to her baby, allowing her body to instinctively push baby out in a very gentle and natural way.

Of the many births in the Home, this was one of the most beautiful and memorable one. None of us thought that Bunso would be able to handle a home birth because of her mental challenges. It just showed us that through her strong interest and desire to birth naturally and because of her experience of assisting in other births, her body instinctively knew what to do. We did not have to tell her what to do. The familiar surroundings, people she trusted and the efficiency of the birthing staff were all instrumental in providing her a safe and successful birthing experience. Of course, we were all so happy when her baby was born, and the baby girl was perfect in every way.