There are two stories our daughter, Mir-Isabel, keeps very close to her heart, stories of her young life that she says she will never tire of listening to “forever and ever.”

The first story is about the moment I first cradled her in my arms – all of five months old, with a squat “Buddha head,” almond-shaped eyes, chubby rosy cheeks, clear, smooth skin. She gave me the sweetest smile I had ever seen on a baby’s lips as if telling me, “I’m finally here,, Mama, and I’m all yours.” It was such an emotionally overwhelming experience that I cried and cried from sheer joy, all the maternal juices that had been bottled up in my heart for so long streaming down my cheeks in my tears. Our photos that day clearly show my puffy eyes and flushed face.

You see, I married rather late. I became preoccupied with my career, overachieving at every turn. By my early thirties, I was a senior vice president of a government-owned holding company. I was used to having everything my way – if I wanted something, I would work very hard for it, and I would get it.

At age 34, I decided to get married to Tony who was also 34 and an officer in a large bank. Both of us came from big families – Tony has eight siblings while we are seven brothers and sisters in my family. It was therefore natural for us to expect and to want to have a large family. And so we built a house spacious enough to accommodate many children.

But things did not turn out exactly as we had planned. I did not conceive right away because it seemed that I had practically all the ailments possible in my reproductive system – a retroverted uterus, hormonal imbalance, irregular ovulation, endometriosis, polyps, and blocked fallopian tubes. Besides, I was always stressed out, juggling my time between my job and my duties as a married woman whose biological clock was tick-tocking rapidly.

I felt that I was racing against time. And maybe, I was even rebelling against God. I resented the fact that here we were, capable of becoming parents, and God wasn’t giving us a single child to love and care for. But those who seemed to be heartless enough to push their children to work out in the streets had more children than they could manage. “It’s so unfair,” I cried bitterly.
It didn’t’ help that everyone I met during family gatherings teased me endlessly about it. “How can you be childless?” they asked, “It doesn’t run in our family.” Tony and I became desperate. We consulted doctors and sought treatment for my ailments, our medical bills eating up our savings. We tried all sorts of things but nothing worked. The whole experience was such a big blow to my ego since I was used to getting what I wanted, doing many things better than most people. I realized then that I wasn’t a superwoman after all.

It didn’t take long before emotional strain began to damage my previously healthy self-esteem. I began to experience the fear that Tony would leave me to find another woman who could bear him his children, a fear that was quite unfounded. At my lowest point, I blamed myself, convinced that I had done something wrong as a child and was now being punished.

In 1985, however, after almost four years of asking God for a child, Tony and I joined the Catholic Renewal Movement where we became fired up by a newfound deeper, personal faith. With this, I experienced something that changed the way I looked at my problem. When a tumor that needed an operation was discovered in my uterus in 1986, I decided to delay surgery and trust God for my healing. My gynecologist prescribed rest, and I did what would have been unthinkable for me before: I resigned from my job. I thought that a respite from my hectic work schedule would make me well and result in the baby that I had been longing for. But by the summer of 1987, the pain in my uterus intensified and became so unbearable that I had to have the surgery. After the operation, my chances of conceiving became almost nil.

But God’s ways are indeed not our ways. His plans are carried out, not our own. In October 1988, recognizing clear signs discerned from deep prayer, I decided to return to the corporate world. From then on, blessings seemed to come my way one after the other. The best of these was one I received in 1989. It happened on a December night when Tony was driving one of our priest-friends to a Mass. Fr. Francis Gustilo, a Salesian priest, knew of the frustration and pain suffered from our failure to have our own child. He casually asked Tony if we were not considering adoption. In fact, adoption had always been an option for me. Though Tony wasn’t closed to the idea, he had wanted us to adopt from relatives. After an attempt to do this four years before had failed, I sensed Tony’s reluctance to pursue any plans to adopt, so I stopped pressing the issue. That evening, responding to Fr. Francis’ inquiry, Tony was “moved by the Spirit.” Relating the experience to me afterwards, he said he found himself telling Fr. Francis that in face we were going to apply for adoption soon. It was the best Christmas gift I had ever received.

Everything proceeded smoothly from there. On February 23, 1990, we applied for adoption. On June 17, 1990 – Father’s Day – Mir-Isabel came home with us. On May 16, 1991, she legally became our daughter. And this is the other “forever story” that Mir often asks me to recount whenever the two of us are cuddled together in bed.

It happened in a courtroom after the legal proceedings had concluded. Mir was a year old then. She loves to hear my own version of the judge’s words. “From this day on, Mir-Isabel Fetil Caringal is the forever daughter of Antonio and Carmela Caringal, and nobody can ever take her away from them.” She was seven years old the first time I told her this story and explained the meaning of it all. “Really, Mama? No one will take me away from you?” was her immediate reaction. When I said “Yes!” she hugged me tightly. She always ends up smiling very confidently every time she hears this story. Tony and I firmly believe that the reason she wants to hear this story every so often is because she gets the assurance that she belongs to us, that she is wanted and loved and that she has a family.

Our daughter is now in fifth grade. She loves Britney Spears, Mariah Carey, and Aaron Carter, but she likewise hopes to be able to sing the high notes of Charlotte Church, especially when she sings Pie Jesu. While she can ape the twangy diction and dance antics of the female VJ’s, she can also mimic the low-voiced, slow and serious tone of a priest-friend’s homily. She can draw anything or anyone anytime, anywhere. We “pig out” on pizza, fries, and ice cream, and we can watch movies all day long. We struggle over homework in Math and Sibika, stay up late to finish school projects or wake up at dawn to download a report that she suddenly remembers must be submitted that morning. She gets hugged and kissed and, when she misbehaves, spanked and grounded. She is as normal as any girl her age would be.

Tony and I continue to learn as much about adoption as we can, and being members of the Adoptive Families Foundation has helped us tremendously. We believe that Mir’s knowing that she was adopted has enabled her to develop self-confidence and has brought out her innate good-naturedness. When she was two years old and beginning to speak, we told her that she was adopted. When she inquired at age seven where her “true mother” was, we told her the truth and promised to help her find the woman when she is old enough. We told her that her birthmother loves her, that she took care of her, that she wanted her to have a bright future. We believe that knowledge of her birthparents is Mir’s birthright. She needs to know that she did not just come from a hole in the sky. And the security she feels about knowing who she is may be the reason that she can breezily retort, “No, big deal!” whenever we ask about her reaction to someone who has teased her about being adopted.
I guess like all adoptive mothers, I always feel a tug in my heart whenever my daughter says, “I wonder where my birthmother is?” or when, in the middle of an emotionally-charged tutoring bout she blurts out, “Mama, do you really love me?” Perhaps this is her own way of asking if I accept her even if she cannot understand her lessons easily. I do think about her birthmother, too, sometimes, and I do pray for her. When these feelings come to me, however, I am always consoled by the memory of that one special evening when Tony and I were resting in our bedroom after a particularly long and tiring day. Mir quietly approached us and very solemnly said, “Mama, Papa, you’re the best thing that ever happened to me.” From then on, whenever I hear the song with the same title, I know that for as long as I will keep hearing that song, I will always think of my daughter, our Mir-Isabel, God’s beautiful gift to Tony and me. 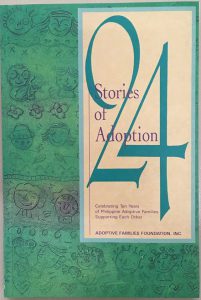