Imagine living under the bridge in Lawton, Metro-Manila for the first 10 years of your life. This was Lanie Lopez’s childhood memories. She camped under the bridge together with other family street dwellers. She had a mother, her mother’s partner and 2 younger siblings. Both her mother and the partner were drug addicts, without regular work, who sniffed solvents & used marijuana. Lanie grew up, a witness to drug use, gang wars, hunger and extreme poverty.

In order to eat, Lanie helped her mother work as a “barker” for jeepneys near the monument at Lawton. Their job was to shout for passengers to ride jeepneys going to Divisoria, Sta. Cruz & Monumento. They would earn about Php100.00/day, barely enough for the next day’s meals. She remembers having an extra Php10.00 which she used as capital to buy cigarettes & candies to sell to passersby, from a cariton. Her earnings grew and from there, was able to add soft drinks to her sales. But there came a point where her mother’s drug use and her step-fathers’ advances started to get worse. When she had the opportunity to share her story with a street educator of an agency who helped street-children, she was referred to Tahanan Sta. Luisa, an orphanage in Quezon City. For the next four years, she was never visited or contacted by her mother.

In Tahanan Sta. Luisa, Lanie experienced some semblance of home. For the first time in her life, she had a roof over her head, she didn’t have to shout to make a living and she got an education. She also received her first ever birthday cake with her name decorated on it. Her face lit up as she narrated the joy she felt to celebrate her birthday. She never experienced a childhood and her first time to play with a doll was in her early teens in the orphanage. 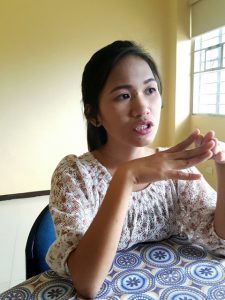 Lanie, who was used to shouting, talking loud and convincing people to ride jeeps, was naturally a friendly and confident child. She excelled in school, was not shy to speak her mind and joined debates. From a life of squalor and instability, she finally had a taste of what it was like to be fed every mealtime, to live in a safe environment and more importantly, to have an education. At age 15 yrs. old, she became an ILEA scholar, and she continued her high school education where she is presently in Grade 9.

She wishes she had a responsible mother and a normal family life. When she sees her classmates whose parents participate in school activities, she feels a pang of envy. As a child, she was always told that she would end up being like her mother, good for nothing and a menace to society. She has proven to herself and others that she can rise up from poverty and be a productive member of society. One day, she hopes to be able to rescue her mother and siblings from poverty.

Lanie knows she has to be serious with her studies and values the privilege of being a scholar of KBF-ILEA. She has plans of taking up Social Work or Education, her way of paying forward for being saved from poverty. Upon graduation from college, her dream is to be able to celebrate in Enchanted Kingdom before returning to the streets. But this time, as a Social Worker or Teacher.